Why did we create the IR Challenge?

The IR challenge consists of 25 challenges in increasing difficulty, created by top analysts and researchers and built to test and strain the skills of IR pros. While CTF challenges are common, there is no equivalent standard for benchmarking one’s ability to investigate through a forensic mess and retrieve a conclusive and actionable result. In light of the continuous increase in attacks’ volume and sophistication and the derived demand for best-of-breed incident responders, we felt that initiating such a challenge could hardly come at a more appropriate timing and we hope that others will follow suit and launch similar challenges.

We’ve created a dedicated website to host the challenges and made available for anyone who wants to come and show what they’ve got. The response was amazing – within two weeks more than 2,500 participants enlisted and gave their best shot against the posted challenges.

Learn the solution for each challenge

Following the conclusion of the challenge, we’re now making the solutions available as a free resource for knowledge and inspiration with detailed solutions for each challenge. In addition, wherever it was applicable we’ve added on top of the solution itself, a demonstration of how during a real incident response engagement, the challenge could have been solved using Cynet 360.

Cynet 360 is the tool of choice for multiple IR professionals as its enterprise-grade distribution infrastructure enables responders to rapidly gain visibility into thousands on endpoints in minutes, accelerating and optimizing the initial investigation stage and identifying suspicious endpoints, processes, user accounts, as well as network connections, and closely inspect them for further analysis. At Cynet, we consider incident responders as the ultimate users, therefor we’ve made Cynet 360 available with no charge for any responder that wants to use it in the course of his\hers IR engagements.

Will provide the following output

Timestomping is a technique to change a file’s date attributes (creation time, modification time, etc..) in order to seem legitimate and not stand out as newly created files.

Cynet’s “File Monitoring” feature logs every action on any files in the system in real-time and reports it to the Cynet dashboard. So, the Cynet dashboard will always show the real creation, modification, and access times for any file. Additionally, the time stomping activity itself will be logged by Cynet.

Bonus: Detecting USB activity with Cynet
Cynet has the ability to monitor and report windows events in real time.

Windows Security Log Event ID 6416, will include information about any new USB device that is connected to the system. Additionally, Cynet can alert on changes to registry keys, such as the “SYSTEM\CurrentControlSet\Enum\USBSTOR” key which contains information about connected USB devices.

Directories, which are known to include Jump-Lists artifacts data.

Cynet’s “File Monitoring” feature logs every action on any files in the system in real-time and reports it to the Cynet dashboard. So, the Cynet dashboard will always show all access times for any file, including information about the user that accessed the file.

Challenge No.4 – Is that you 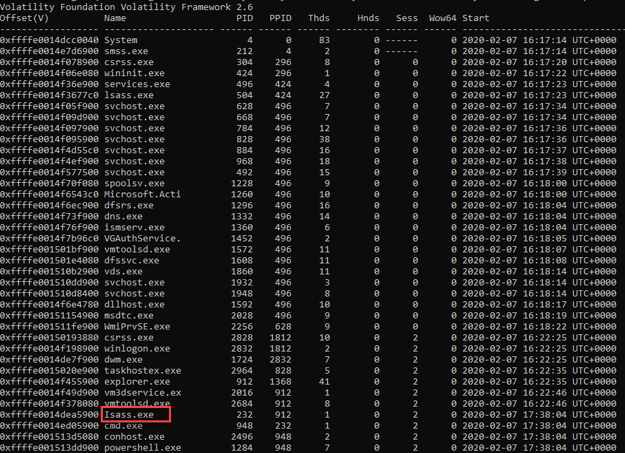 Masquerading is the attempt of a malicious process to “hide in plain sight” by using names that seem legitimate. Cynet Driver capabilities will alert on processes that attempt to use legitimate process names. Additionally, the File monitoring feature will include the full details on any file executed in the system.

Cynet’s Forensics dashboard shows every execution occurrence of every file across the organization: Cynet logs any network activity of it’s protected severs, including IP’s, ports, the related process, and running user. A quick search in the network forensics tab of Cynet will show the IP address that nc was connected to. Additionally, Cynet will actively alert on any suspicious network activity. Cynet’s will log and alert on new processes that were added to the system start up list.

Cynet’s “File Monitoring” feature will show all access times for any file, including information about the user that accessed the file. Challenge No.9 – Can’t Touch This

File name: JohnSnowPST.pst
*The name of the challenge itself is also a hint to the PST file which should be found. (PaSTe).

Cynet’s “File Monitoring” feature will show all executions of any powershell.exe instance. Additionally, Cynet’s “Windows Events” monitoring can be used to monitor “Microsoft-Windows-PowerShell/Operational“ events that will include the content of the executed PowerShell script. Furthermore, Cynet will proactively alert on malicious WMI and PowerShell usages.

Bonus: Detecting Lateral movements with Cynet
Cynet’s Driver protection will block any attempt of mimikatz to extract credentials from lasss.exe of from the SAM. However, if Cynet wasn’t present at the time of the attack, it’s still possible to use Cynet’s Windows Events feature to track windows security event 4648 which includes details about past login events across the organization.

Cynet logs any network activity of its protected severs, including IP’s, ports, the related process, and running user. A quick search in the network forensics tab of Cynet will show the abnormal port that is used by chrome.exe to tunnel data.

Cynet will log and alert on new processes that use persistence techniques such as the “SilentProcessExit” registry key.

Cynet can be used to pull any file from protected systems, including the RDP cache files from the “%LOCALAPPDATA%\Microsoft\Terminal Server Client\Cache” folder. Using the files forensics section in Cynet, it’s possible to quickly identify new files that were never seen before. Which can indicate that the malware is the known “HiddenTear”.

Cynet’s driver will block and alert immediately about any ransomware execution attempt.

Output will show that LANNISTER is the suspicious PC Cynet’s Windows Event feature can be used to monitor Event ID: 15457 from the Windows Application Log, which will include data on server configuration changes.