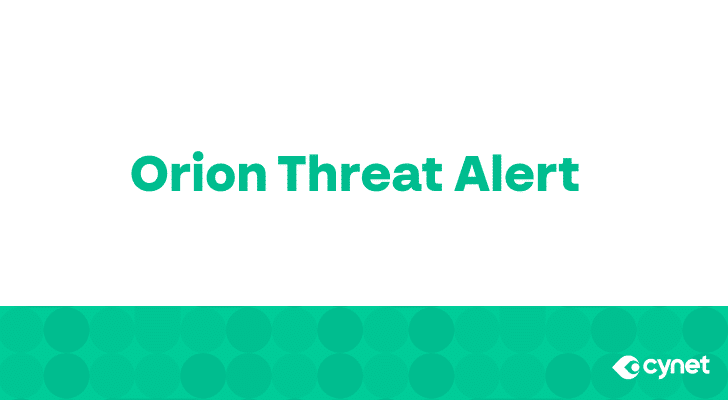 Wondering what’s going on? Let us fill you in.

We noticed a new trend in Initial Access Brokers’ (IAB) tactics to gain access to their victims’ machines. Initial Access Brokers refers to a cybercrime group that specializes in gaining initial access to organizations for the sole purpose of offering it to other threat actor groups. The trend started earlier this year and our team recently spotted their new BumbleBee campaign.

Usually, we observe malicious spam (MalSpam) campaigns that deliver malicious documents (MalDoc) to lure the victims to interact with the MalDoc and execute the malicious macro code by clicking “Enable Content.” That in turn downloads and executes the malicious payload, for example, the notorious Emotet campaigns.

We expected these groups to change the initial access methods. We believe there is a direct relation to the changes Microsoft applied recently to the default policy in their Office products: “Macros from the internet will be blocked by default in Office” and “Excel 4.0 (XLM) macros are disabled by default.” These changes impact IABs because they have been abusing Office documents with malicious macros for years.

It appears that they’ve come up with a plan B.

In this post, we will cover what this campaign is, and how the IAB distributes the BumbleBee malware and its TTPs. We will also explain each TTP according to the MITRE ATT&CK model, and its purpose.

A new campaign in the wild: BumbleBee

From our initial analysis, BumbleBee is a custom new loader that is used by different IAB groups. This malware was observed injecting Cobalt Strike shellcodes in memory and using several tactics, techniques, and procedures (TTPs) in order to compromise the victim’s environment.

As part of the campaign, the threat actors abuse spoofed companies’ identities (like fake employee email addresses, fake websites, etc.) and use legitimate public storage services to deliver the malicious ISO image file. The ISO image file is responsible for luring the victim to execute the BumbleBee malware.

We’ve seen Living Off the Land Binaries (LOLBins) execution with rundll32, which allows threat actors to avoid defenses. BumbleBee also creates a scheduled task on the compromised host for persistence and executes a Visual Basic script via the scheduled task. The IAB relies on the user (victim) execution to execute the BumbleBee payload by luring the victim to mount an ISO image file and click on a Windows shortcut (LNK) file.

The malware name, BumbleBee, was chosen because of its unique user agent, “bumblebee,” that was used as part of the communication with the command and control server (C2).

This type of attack is new, and the cybersecurity community is still gathering data to glean more insights on the nature of this attack and its targets.

Orion found a high number of targeted companies based in the US with the following distribution method that delivers the BumbleBee malware: Spear phishing email > URL Link (TransferXL, TransferNow, WeTransfer) > Zipped ISO > ISO (contains the LNK file and the BumbleBee payload).

You can see the execution flow in the image below.

We’ve handled several incident response (IR) cases where threat actors distributed BumbleBee malware. After the initial infection, the threat actors inject Cobalt Strike shellcode in memory and execute discovery commands to collect info about the victim’s network. We believe that threat actors performed this data collection in order to execute the next stage of the infection.

The next stage is probably related to ransomware operations. We’re still investigating IR cases in order to find conclusive evidence that the next stage delivers ransomware.

You can see an example in the image below.

The IMG file, which contains LNK and DLL

The BumbleBee payload was delivered via a spear phishing email that was sent from a spoofed email address. The email contains a URL link to the legitimate public storage service, TransferXL.

Spear phishing email with a link to TransferXL

Below you’ll see the legitimate public storage site, which leads the victim to the link to the malicious file.

Once they click download, the victim receives a ZIP folder that contains the malicious ISO image files. 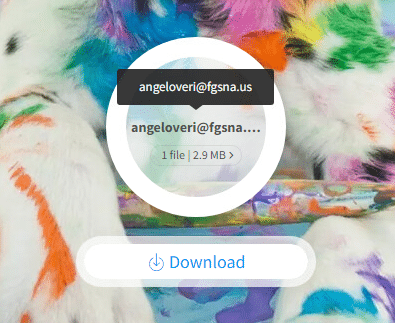 Below is an example of what the ZIP file from the TransferXL link looks like. 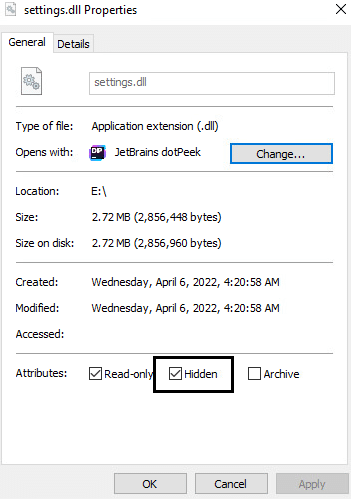 Hidden attribute for the DLL

The masqueraded LNK file properties show that the execution target is as follows: After the initial execution, the BumbleBee DLL is copied to the %programdata%/{RandomDir} directory. In addition to the DLL, a VBS script is also dropped to the same directory:

TTPs indicators during the execution

We have other artifacts from different IR cases, where we have observed the following activity. The screenshot below shows an event that detected a creation of a payload in the %ProgramData%\{Random} directory the DLL payload is a copy of the initial BumbleBee loader that executed by Rundll32 from the ISO image file:

Copy of the BumbleBee DLL to %Programdata% directory

In other IR cases, we observed an execution flow that’s bit different. For example, a LNK that points to the following execution targets:

We detected a scheduled task execution during the BumbleBee infection:

We also observed WMI execution. The VBS file that was executed via a scheduled task, was also executed through WMI:

Strings from the Bumblebee loader show the WMI Win32_Process execution

In our labs, we observed that BumbleBee uses several anti-VM methods to avoid detection.

One of the anti-VM checks is related to the VirtualBox product: 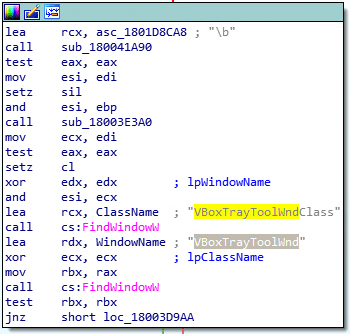 Check for lpWindowName if matches VirtualBox

Other anti-VM artifacts were found after unpacking, as can be seen in the following strings: 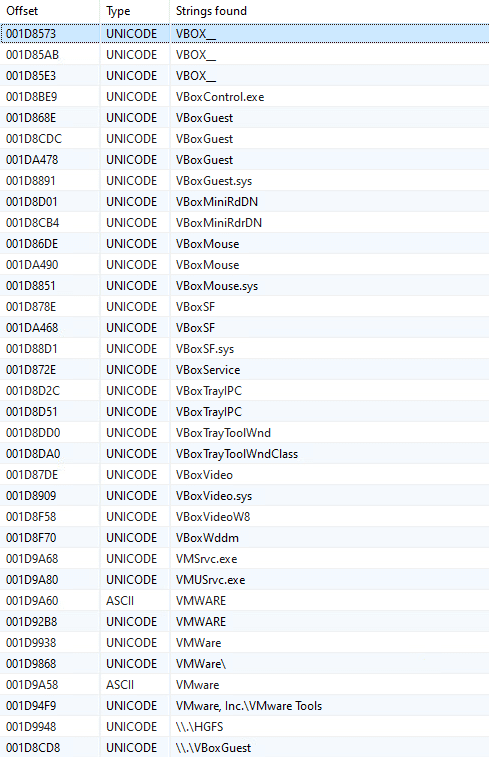 List of strings that are related to VMware and VirtualBox

BumbleBee also detects if it is running within a VM by checking for known services that are related to different VM products: 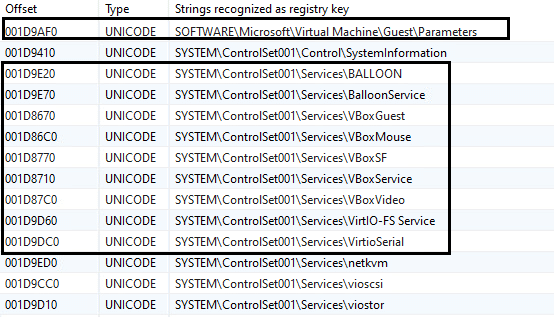 List of services that are related to VM products

BumbleBee checks whether certain user names reside in the victim’s machine by comparing against a hardcoded list of user names. This allows BumbleBee to detect sandboxes and labs that are used for malware analysis:

List of hardcoded usernames which are related to sandboxes and labs

In addition, it uses WMI queries to collect system details and information:

We found that the threat actors used the AdFind tool to enumerate and map the victim’s network. The ADFind tool was found in the %ProgramData% directory.

In the instance we observed, the following commands were used: 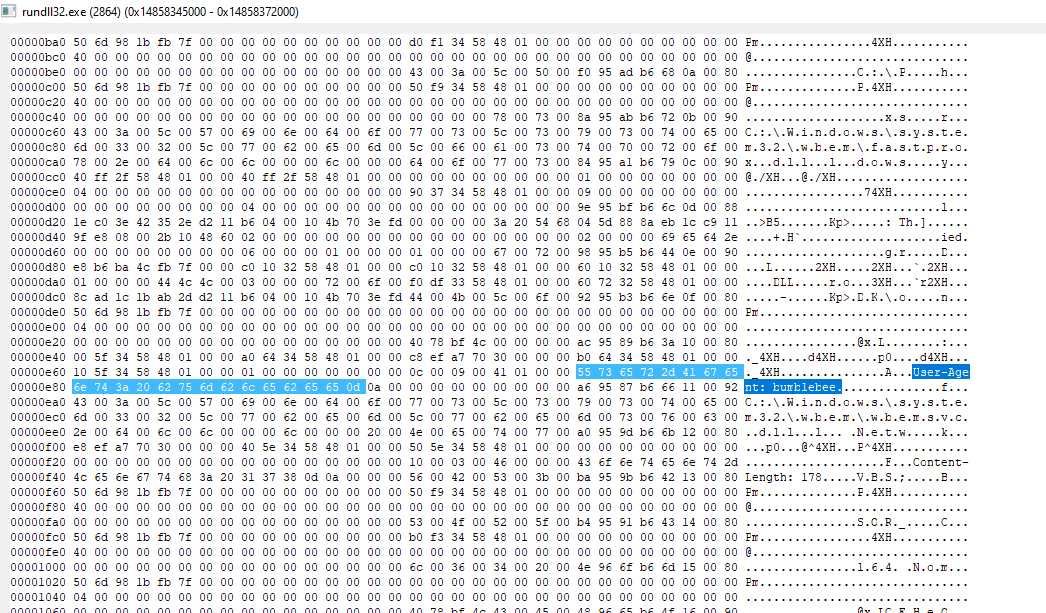 Example of the unique User-Agent: BumbleBee in the payload’s memory

All the collected system and network information is sent to the C2 server, which sends back a response containing the next step/command to execute based on that info.

In this section, we will cover some interesting indicators and artifacts that highlighted the BumbleBee actions and heuristics. These artifacts also help us to identify the BumbleBee malware.

We analyzed several payloads and all of them had the same artifacts.

After unpacking the BumbleBee loader and by searching in the metadata of the unpacked payload, we identified BumbleBee’s internal name, “LdrAddx64.dll,” and two export functions – “IternalJob” and “SetPath.” 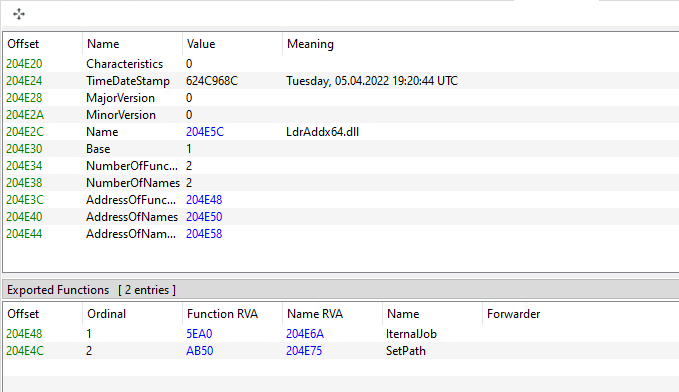 By inspecting the unpacked BumbleBee sections, we discovered that the .data section contains two executables:

We extracted the two hidden payloads from the .data section by using Hex-Editor tool:

Hex-Editor shows 3 MZ headers: the first one is the Bumblebee, and the other two are additional payloads

The first payload from the .data section is a 32-bit DLL payload: 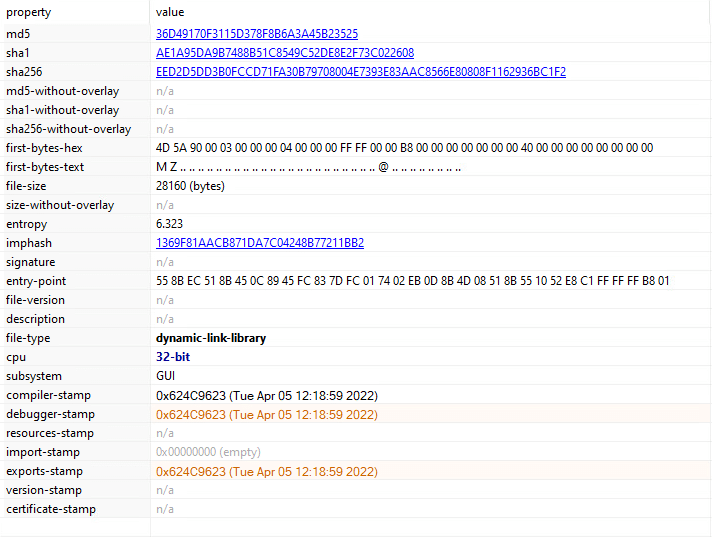 We found a few interesting functions in the payload strings indicating that this payload has process injection capabilities. For example, “CreateProcess,” “NtWriteVirtualMemory,” “CreateRemoteThread,”and “WinExec.” 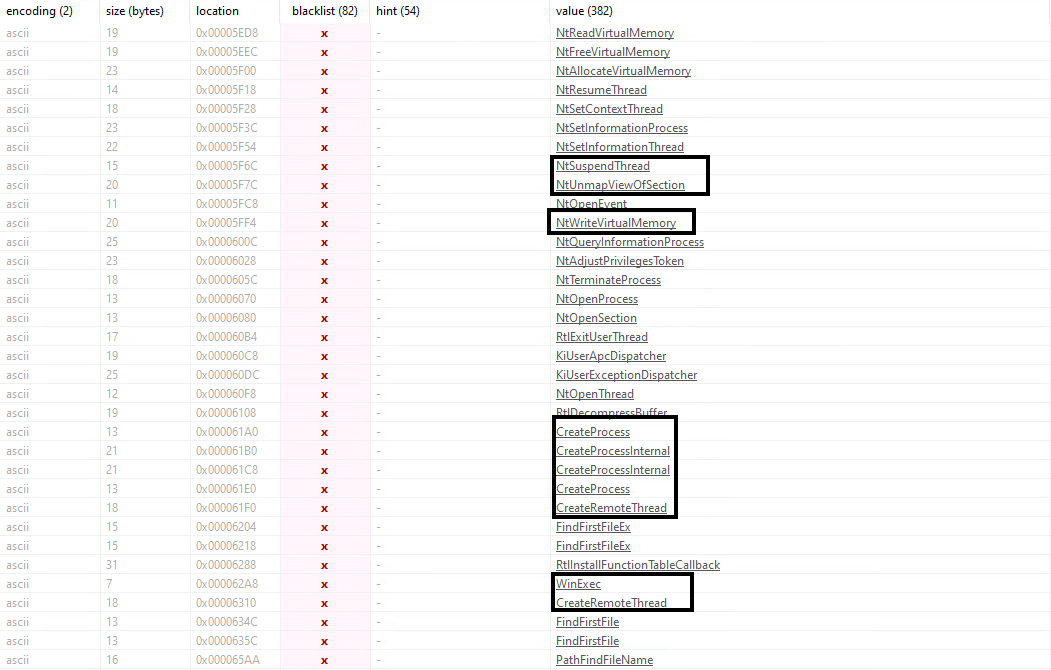 The second payload that we extracted from the .data section is a 64-bit DLL payload: 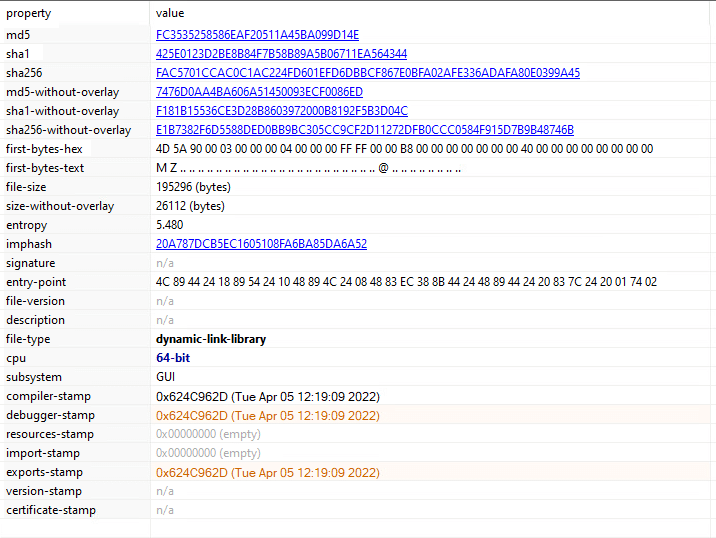 We analyzed the payload binary and noticed that this payload is responsible for communicating with BumbleBee’s C2 server:

BumbleBee threat actors are not the first to change the initial access method from malicious office documents to malicious ISO image files. The ISO image file abuse was also seen a few years ago, but in recent months, we have observed an increase in “ISO campaigns.”

In most of the cases, we’ve seen that during different IR cases, the campaigns escalated to full-blown ransomware attacks. We believe that IAB groups work and collaborate with ransomware affiliates like CONTI, LockBit, AvosLocker, and more. For example, we observed an IcedID infection that leads to CONTI ransomware attack (Shelob Moonlight)..

The Orion team is constantly monitoring BumbleBee and the IAB group’s activities closely and analyzing them to better understand their motivation. As we learn more, we will publish our findings and artifacts to share additional insights for BumbleBee infection to ransomware post-attack chain.

We’re expecting to see more malware campaigns that will use the ISO delivery method in the near future. So, stay vigilant.

We hope this was helpful. And remember to check our blog page and follow us on social media to see when we publish updates.

Have questions? Let us know.