A feature of the LockBit ransomware allows threat actors to breach a corporate network and deploy the ransomware to encrypt hundreds of devices in just a few hours.

LockBit threatens to leak the data of their victims to extort payments. As we see above, the file poses to be from ‘Microsoft’, pretending to be legitimate and safe.

Another indicator we see is statically high entropy levels that the executable has. We can assume that the payload hides under the ‘.text’ sections. Which tells us that the attacker tries evading traditional AV’s mechanism from detecting this file via file scanning on the disk which is signature-based, by compressing the file with a unique format.

Once the file is executed, the following flow will take place:

The file scans the entire LAN network and tries to connect to the hosts via SMB port (445) to spread the malicious file all over the internal network. An instance of SVCHOST.exe is running by the process DLLhost.exe which runs with the following command to bypass the need for User Access Control when doing so:

This method is known as CMSTP:

The ‘backup.exe’ file will execute the payload and encrypt most of the user’s files and change their extensions to ‘lockbit’:

Immediately after, a ransom note called ‘Restore-My-Files.txt’ will be dropped in several folders on the host:

A new instance of CMD is launched to execute the following command:

These commands are used to clear logs that contain records of login/logout activity or other security-related events specified by the system’s audit policy and applications. The attacker hides their tracks to avoid future forensics on the host by the IT/Security Team.

To maintain the persistency of the malicious file on the user’s host, the payload creates a registry key that will execute the file every time the host will startup.

While the files are been encrypted and the note is dropped on the user host, an instance of CMD is launching, executing commands to delete the shadow backup copies, and the backup catalog on the user host by using ‘VSSADMIN’ and ‘WMIC.exe’ to prevent system recovery using ‘bcdedit.exe’ to ignore errors if there is a failed boot/failed shutdown and to disable the ‘Windows Automatic Repair’

Anti-Virus/AI – This alert triggers when Cynet’s AV/AI engine detects a malicious file that was loaded to the memory. ADT – Malicious Process Command – This alert triggers when Cynet detects a CMD process that executes a command that contains suspicious arguments or is associated with malicious patterns. 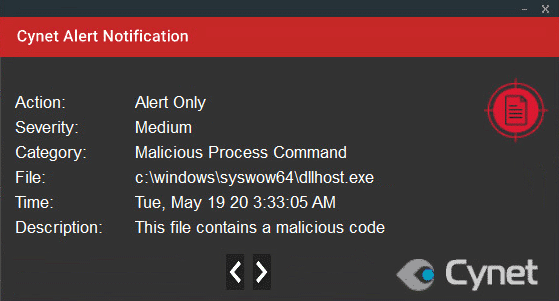