Emotet vs Trump – Deep Dive Analysis of a Killer Info-Stealer

Emotet is the widest spread modular banker data-stealing trojan in the last two years. It aims to gain remote access on the compromised host in order to steal banking credentials, financial data and even Bitcoin wallets.

It is also used as a downloader for other known malwares such as TrickBot (Trojan banker) and Ryuk (Ransomware).

Emotet was first invented in May 2014 in order to spy on compromised environments, steal credentials for cloud storage, email data, and upload this information to a remote server.

Emotet is a polymorphic banking Trojan that can evade typical signature-based detection.                       Earlier versions of the attack were found in malicious JavaScript files, but later, the attackers upgraded the attack by weaponizing Office documents with malicious VBA macro scripts.

It is distributed through phishing and spam emails which use social engineering techniques to lure the victims into opening a malicious attachment or malicious link. Once the user enables the macros, the VBA script in the weaponized Office document will execute a malicious command and download the Emotet payload. The payload will enumerate the compromised host and achieve a persistence. The collected data and information will be sent to the Command and Control server of the attacker.

Additionally, the communication with the Command and Control server can potentially download further payloads to the infected host according to the settings on the attacker’s server. This usually happen when that the stolen data matches the terms the attacker is looking for and have coded into the server.

The first stage of the Emotet attack flow starts with an email that has a weaponized Microsoft Office document that contains a malicious VBA macros code. Upon loading this document, an image appears with instructions for the user to enable the macros in order to view the real document.

Enabling the macros is the only user interaction that is be needed to initiate the attack. From that point on, it will be progressing without any interaction. Once the highly obfuscated VBA has been executed, a base 64 encoded command will run through a PowerShell instance in order to download the Emotet payload on the victim’s environment.

The second stage of the Emotet attack chain is to execute a PowerShell.exe instance in order to communicate to the Command and Control and download the Emotet payload. 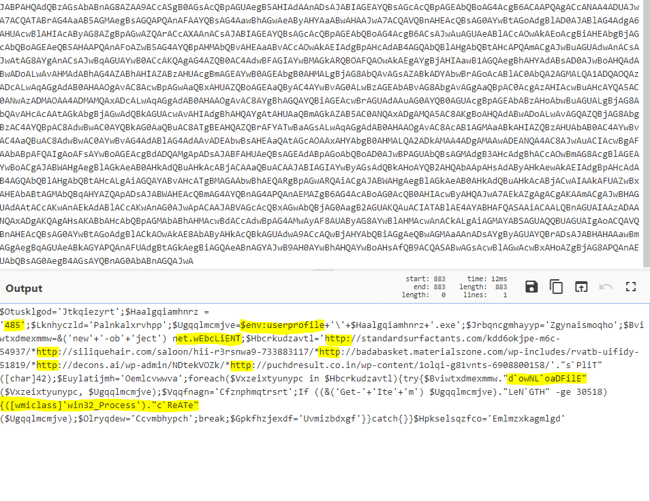 After decoding the base 64 PowerShell script,  we can see that the PowerShell instance attempts to download  the Emotet from different domains. The domains will split in the code below by the  * character. Most of the time those domains are compromised WordPress sites, these sites delivered the Emotet payloads.

The Command and Control downloaded the Emotet payload in a packet format (MPRESS packer). This method made the analysis and the traditional AV(Anti-Virus) detections more difficult, in most cases Emotet binary packet with a two-layer packer.

The above domain related to the following IP address:

By using known packer detection tools, we can see that the Emotet packet payload has a high entropy level which indicates that the meta-data is highly compressed and encrypted. 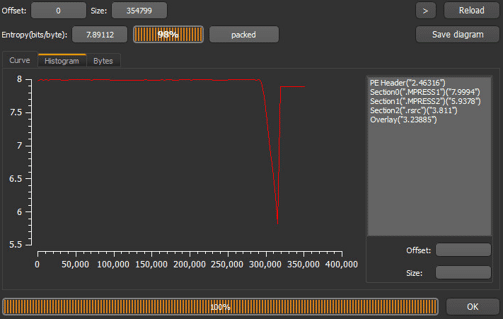 This is the Emotet packet payload meta-data section view: 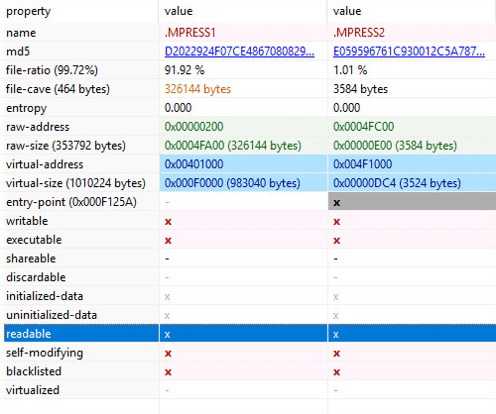 The Emotet payload downloaded by the command to the User directory folder. 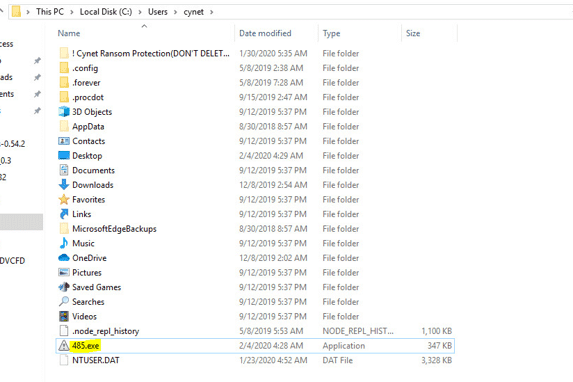 The third stage was an instance of Svchost.exe which opened Wmiprvse.exe which in turn launched the Emotet payload that was downloaded from the attacker’s Command and Control, as mentioned above.

The Emotet payload was executed by wmiprvse.exe and not by PowerShell.exe instance so it can utilize the capabilities of Wmic. In the PowerShell command, the invoke method to execute Emotet payload is with the following command:

WmiprvSE.exe is a DCOM server, it is spawned under the DCOM service host- svchost.exe which is executed with the following parameters:

The successful run of this PowerShell command results in the continuation of this tree. An instance of Wmiprvse.exe is opened under Svchost.exe and launches  the Emotet payload.

This technique “not my parent” is used to avoid behavioral detections of parent and the child process.

[Diagnostic.Process]::”Start” – “Starts a process resource and associates it with a Process component.”-MSDN

After Launching a second instance of itself, the binary of the Emotet copies itself to a different location and deletes itself from the Users directory. The new directory path of the Emotet payload:

The actions are executed by the three digits Emotet payload that is located in the Users directory. This is done in order to better hide the malicious payload in an unsuspecting victim system.

This path (C:\Users\User\AppData\Local\) is known as a suspicious location. The location is often favored by malicious actors, therefore knowing that helps narrow the options of exploration. Malicious executables install themselves to writable areas on a victim’s file system, the most common among them is the user home directory.

Stage four of the Emotet threat is to gain a persistence on the victim environment. Emotet persistence technique is registering the Emotet binary in the Run key in the registry, in order to ensure its run regardless of user interaction.

Additionally, in some cases Emotet can use an LNK file, a scheduled task, or by creating a service.

In this case, the Emotet used the “Microsoft\Windows\CurrentVersion\Run” registry key. 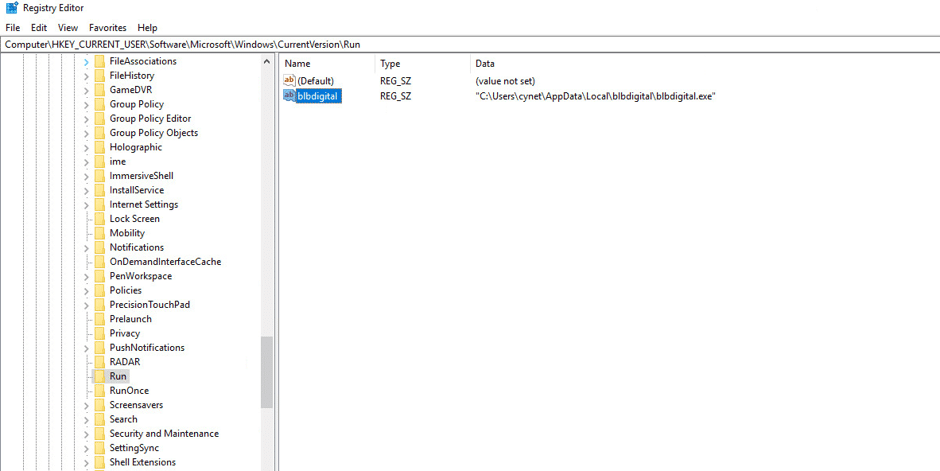 Futhermore, Emotet modifed the following registry in order to config the Internet Explorer.

The persistence and modification of the registry keys used by the advapi32.dll file is a software component of Microsoft Windows, that is designed to support several APIs including registry and security calls.

The API function that was used in order to open a specified registry key:

The enumeration process of the Emotet in order to gather system information, process list the host name etc.

For example, the Emotet used the following Windows API functions:

GetSystemInfo: “Retrieves information about the current system. To retrieve accurate information for an application running on WOW64, call the GetNativeSystemInfo function”-MSDN. 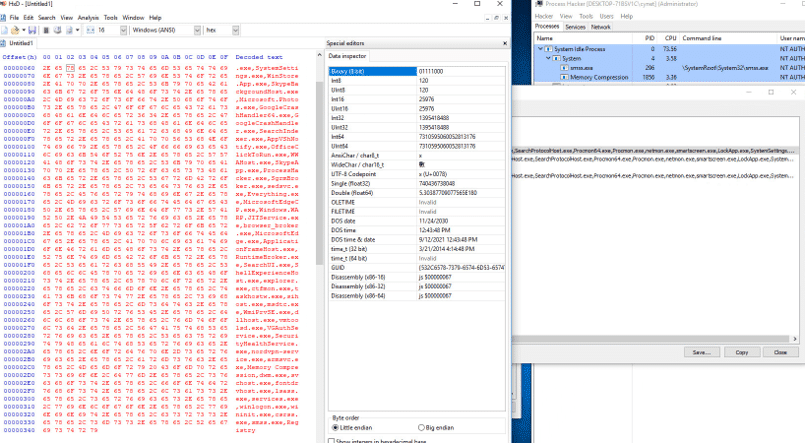 After gaining the persistency and enumerating the compromised host the next stage of Emotet is to connect to a new IP address on port 80.

The malicious IP address stored in the memory process of the Emotet payload. 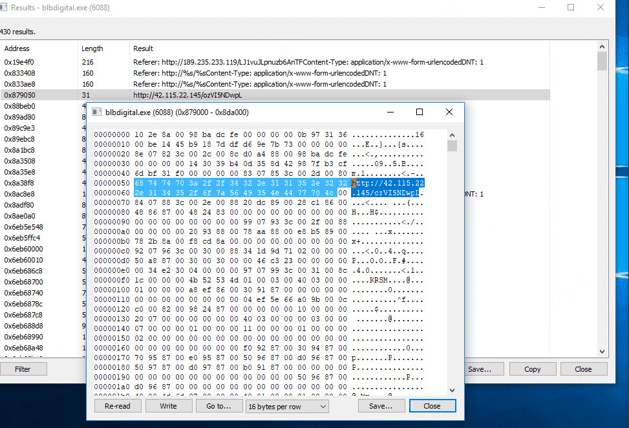 When following the TCP stream of the file’s conversation with the following IP addresses, it is possible to find and observe the packet sent to the server.

This HTTP body contains the data in base64 encoded format:

This packet consists of encrypted data. This data contains all the collected information from the victim’s system. 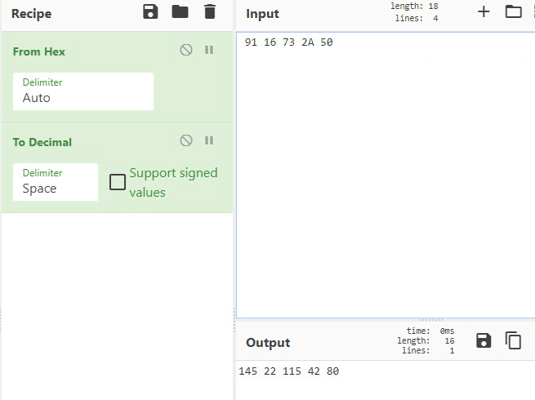 After connection has been established to the Command and Control Server and the data has been successfully transferred to the attacker, alongside the fact that the malicious payload has successfully built its persistency, the attacker will be able to distribute further malware onto the infected system. This additional payload can vary to any malicious malware that the attacker is familiar with, the further malware that will dump to the compromised host depends on the information and the type of company. 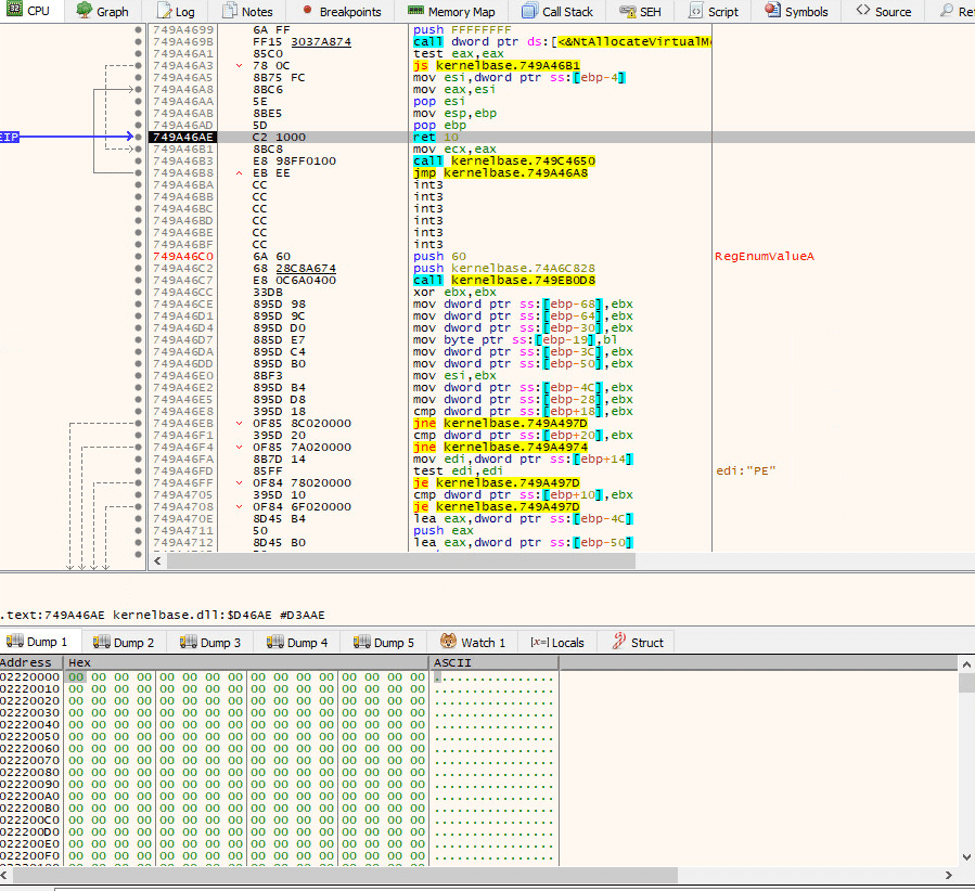 In order to unpack we set a breakpoint on the following Windows APIs “CreateProcessInternalW”,“VirtualAlloc” and on the return of the VirtualAlloc in order to see the calls to this function.

The ‘ret’ (return) of the VirtualAlloc, returns a value to the EAX register and this is the interesting value that the unpacked Emotet stored in the address base of all the unpacked data. In the beginning, the address of the EAX is blank(nothing has been written to the specific return address)

After using ‘run to user code’ option, the EIP register hits on the new address after the call to the VirtualAlloc, and a few values have been pushed to the stack before the call.

The next extraction is to move a buffer to the ESI register, after following the dump of the edi+54 (the buffer) We can now see the MZ header of the unpacked Emotet. When we follow to the Memory Map, the protection page has ERW protection rights (Execute, Read, Write) The dump of the unpacked Emotet binary: 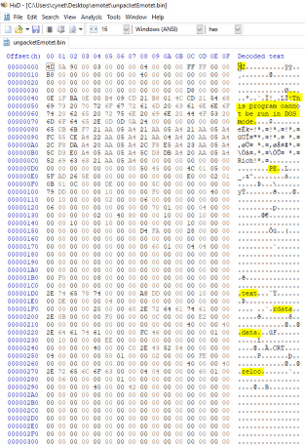 The difference between the packed and the unpacked Emotet binary. 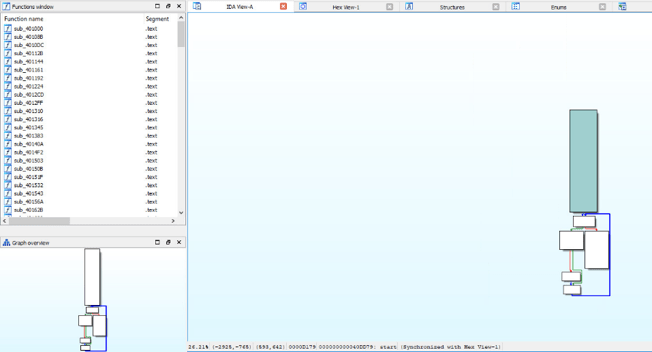 Interesting indicator found through static analysis is that the Emotet attacker takes an interest in the United States politics and the CNN news. They set a reference to the CNN update from 6\2\2020 .

The following highlight stings found in the meta-data of the Emotet Payload. In order to clean up an infected host, it crucial to revert each of the steps taken by the payload of the attack.